She was 19ish, blind, deaf, and well-advanced into dementia so death was not unwelcome or unexpected,  but still…

I never got the attraction of dogs until we found each other.  She was a rescue basset and had been found abandoned in a downtown park.  She was probably confined in a small kennel most of her life in order to birth litter after litter of puppies.  Then dumped when she was too old to be profitable.

She introduced herself to me by shuffling up to me and plopping her considerable weight on my feet, rolling over and presenting her belly for rubbing.  She had a large whooping bark whenever she felt the need to call attention to herself.   She was happy in the here and now.

As her dementia worsened and she became incontinent, irritable and disoriented, she taught me about love.  The need to love the sometimes unlovable.  To love her for what she had brought into my life. To see past the behavior and to love the whole being…to love Daisy in the here and now.   To love her because she is a living being that is deserving of love simply because…not for what I might get out of it, but for what she needed from me.  Love is rarely 50-50.  If I’m keeping score in a relationship, it’s not love.

But, now I say goodbye to one of my greatest teachers.  I hope I can remember the lessons learned and use them well. 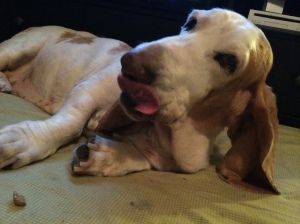 One thought on “Daisy”