I don’t normally do two posts in a day, but I am so excited!

Let’s start at the beginning.

I was reading a blog about gardening.  I can’t remember which one (but that’s not really important).  There was an article about worm composting.

I already compost and have two bins:  a fast one and a slow one. 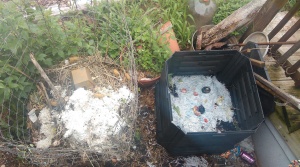 The fast one is a fancy bin actually designed for composting and has vents and a lid and everything.  I fill it in the proper proportions – layering wet and dry stuff the way you are supposed to.

The other one is a piece of leftover fencing.  In that one, I throw everything else.  Weeds, paper, kitchen stuff, yard debris, whatever.

It’s pretty dry here – until the last couple of months we’ve been in a drought – so composting is a challenge.  It’s hard to keep things wet enough and then there’s the fire ants.

When I came across the idea of worm composting or vermicomposting, I was interested.  I kind of just like earthworms.

I won’t share the instructions because they are all over the internet.  I pretty much followed the general idea.  I didn’t buy the exact worms that you are supposed to use because they can be pricey for my current budget (what budget?)  I just bought a distant cousin (fishing worms from Wal-Mart). 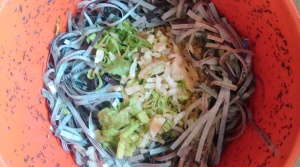 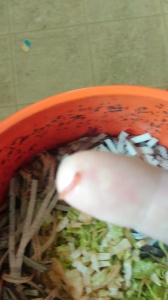 And it’s working!   I now have several generations of earthworms.  Not only are they still alive…they are reproducing.  The top bucket is full enough that I need to add a third.

Some ideas don’t work.  But sometimes they do and that makes the trying worthwhile.

I don’t anticipate that I’ll be living off the land anytime soon…pretty sure that I don’t ever want to labor that hard…but it’s fun to plant a seed and grow something that you can eat.

Or to buy six worms and end up with lots of worm babies and awesome worm poop for the garden!