This Sunday is coming to a close.

We had breakfast:  bacon, sausage, biscuits (from scratch, not that I’m bragging), eggs, and grits.  I didn’t do the dishes or clear the table for that matter because…

being the supportive mother that I am, I made art with her.

There is; therefore, no amazing “after” photo of the cleaned studio.  No apologies.  I stand by my decision.  Art first.  Dishes later.

I did manage to declutter my five for today: 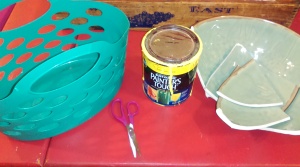 A storage tote that used to hold something that I don’t have anymore.  I’ve been saving it and moving it from pile to stack just in case I could use it to organize something that I probably don’t need to keep.  Donate.

An almost empty and almost dried up can of paint in a shade of yellow that nobody could love.  Even me, and I love yellow.  Why was I keeping it?  I guess just in case I wanted to do a partial, bad paint job in a color that I don’t like so that I could make something I would end up hating and have to throw away.  Or not throw away because I might be able to fix it.  On the deck to finish drying out and then into the trash.

And a bowl that my oldest daughter found and bought last weekend.  It was beautiful and she was going to use it in her trailer/home as a wash basin. It came home from the thrift store and was carefully placed on the kitchen counter – with a package of hot dog buns in it.  CRASH!  Our master thief and acrobatic basset hound who loves bread in any shape or form knocked it off the counter and made off with the buns.   I saved the pieces in hopes that I could put it back together in some creative way and fix the damage.  In reality, all we would end up with is a patched together broken bowl and a memory of what could have been.  Letting it go.

And number 5:  a door that used to separate what is now the studio/classroom from the rest of the house.  We installed it when the oldest girls used it as a bedroom when they first started school and were living at home.  That was at least three years ago.  We cut it in half because I thought that it might be neat to make a…I don’t know…a cut-in-half-door that didn’t actually close off a room that we didn’t need to close off anyway.  That was almost nine months ago.  Out of here and on the burn pile.