Monday.  The first day of another working week.  A fresh start.  A new day.

Today, I am battling the effects of a couple of new medications.  All I want to do is sleep.

This could be a side effect that will eventually go away or it could be a sign that the new anti-anxiety med is working and I just need to adjust to not being in a perpetual state of anxiety.  This feeling could actually be “normal”.   Maybe I’m just relaxed.  It feels like I’m moving in slow motion.  When you’re not “normal”, it’s hard to know.  I guess time will tell.

I do know that the words are not flowing well today.  That could be the meds or it could mean that there just nothing much interesting to write about.  I am working on developing better habits though, so I think I shall write anyway. If I miss one day, it tends to lead to missing two…and then weeks have gone by.

I’m starting to realize that developing those habits and creating a routine is an important part of living an intentional life.  It’s hard to be intentional when there is no plan.  This is an obvious realization, I know…a true slap the forehead, duh moment.  Better late than never, right?  At least I finally figured it out and now I can start applying it to my life.

I’ve “played” with the idea of planning out things before.  I’ve set up cleaning schedules and errand days, and written out menus.  I’ve spent hours on developing the routines and then dedicated about the same amount of hours executing them.  They never became habits.  Just dreams that never became reality.

So, I’m rethinking habits.  And writing down some plans.  And not trying to implement them all at once.

There is a plan for maintaining the house so it is more of a home.  Today is “living room day”.  I’m not going to try and clean the whole house and recover from the weekend.  I’m just going to clean the living room.  Then I’ll try to pick up as we go through the week.  And clean it again next Monday.

I’ve spent some time figuring out the mess that is our budget and am almost ready to start paying down the debt again.  Life got so crazy that all I could do was try and keep up with the monthly bills.  Time once again to work on being debt-free.

A huge load of donations is waiting by the door to be delivered to the thrift store tomorrow.  Much of the pile is wedding stuff.  There is a bit of household clutter mixed in. The hallway is passable again!

Speedy the dog is not being donated!  Of the four canines, he is the good dog right now.  He just walks around wagging his tail and waiting for someone to pay attention to him.  The only time he barks is when another dog has taken the bed he believes to be his or when he has to wait in line for dinner.

Two projects are active in the studio and two more canvasses have prep coats on them waiting for inspiration.  Making a habit of spending time in the studio is a priority. 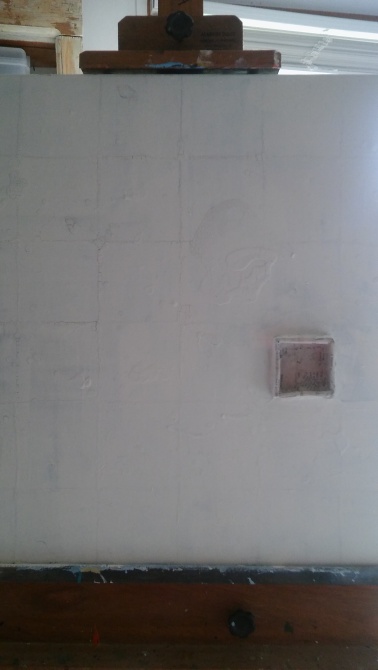 Just works in progress.  Not very interesting so far.  The textile project gets worked on while watching t.v. My sister comes over several evenings a week and we watch British mysteries.  The canvas is slowly coming to life.  I believe a bird is going into the little box in the lower right corner.  Maybe a window or a door.  Not sure yet.

This week.  A new week.  I’m hoping it will be slow and slightly boring…just building routines and habits.

This month has been full of “firsts”:

Yep, I think it’s a good week to have a quiet week.  Here’s hoping.

May your week also be filled with only good things!

One thought on “Another Monday”